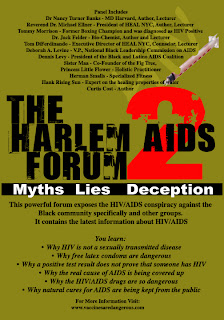 Why Black People Must Die!

The greatest threat to Black People in and other parts of the world is the lack of interest in vital information that impacts their health.  Whether it is cancer, diabetes or heart disease, Black people top the charts. Each day many suffer and others die needlessly because they failed to devote a small portion of their time to reading serious material regarding health issues such as vaccines, HIV, cancer, diabetes etc. Young Black teens are obsessed with hip hop, sports and trashy negative books with themes like “My Man Did Me Wrong” or “Sisters Ain’t No Good”.   The vast majority of Black book vendors selling on the streets only sell these types of trashy books.  The older generation is obsessed with church, sports and similar topics, none of which guides them on how to protect their health from the real threats out there.

It is stunning just how dumb downed the majority of Black people have become.  Let some rapper come to and there will be a line for blocks with people ready to throw their money away to hear some brainwashed high school drop out yelling and cursing a bunch of nonsense.  Let a brother or sister offer a lecture on curing diabetes naturally, or the dangers of sonograms and mammograms, or why vaccines are unnecessary and harmful, or why HIV is not a sexually transmitted disease, and they will be lucky to get 20 people to show up.  By contrast, Whites, Asians and other ethnic groups are aggressively seeking such information. They have written books on these types of topics; they host forums and other events around the country, and they have formed organizations around these kinds of issues.  The few Black organizations out there dealing with health issues are generally misinformed and are giving our people the absolute wrong information, yet they are hailed as heroes and given awards, funding and plenty of air time in the Black media.  It is utterly disgusting!  Others laugh at us at how stupid and backwards we are in terms of keeping up with critical health information.
I have talked with brothers and sisters who are holistic practitioners, doctors and scientists and have been trying for years to help inform our people, but with limited success.  Many have reached the point of almost giving up and they confine their efforts to small groups who are willing to listen and learn.

In the information age knowledge is power, and the lack of knowledge is weakness.  Black people are very weak when it comes to health issues.  It is for this reason that it is inevitable that Black people must die!  Unless?
Curtis Cost
Heart Disease and African Americans
http://minorityhealth.hhs.gov/templates/content.aspx?ID=3018

African-Americans Have Highest Cancer Rates of All Racial Ethnicities, Yet Feel Less at Risk, Study Finds

The Office of Minority Health
http://minorityhealth.hhs.gov/templates/browse.aspx?lvl=2&lvlID=51
at 3:42 PM 5 comments: